Posted on January 8, 2014 by observationblogger — 2 Comments 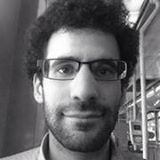 I had the good fortune to read Eli Glasman’s blog this morning  which contains several entertaining articles I thought I would share with you.

Eli comes from the same beautiful part of the world that I do – Melbourne, Australia.

As his blog states, ‘Eli Glasman is a Melbourne based author. His debut novel, ‘The Boy’s Own Manual to Being a Proper Jew’, about a homosexual boy in the Melbourne orthodox Jewish community, will be released through Sleepers Publishing mid 2014.’

In Eli’s FAQ section he responds to the question, Are you gay?  ‘Man, I’ve been asked this one a lot. And every time I get asked I consider it an honour. Seriously. But unfortunately, no, I’m straight.‘

This reminded me of a great scene from Seinfeld, when a reporter thinks Jerry and George are a gay couple after a joke at the coffee shop.

I like all three of Eli’s publications. My favourite short story is the second. You can click on the title to read it.
‘Chillers – ‘This is about a young orthodox Jewish boy (again) who wants to have sex for the first time without breaking Sabbath…..It was published in Sleepers Almanac no. 7. 2011.‘

What I enjoyed about the articles apart from the awkward situations relating to trying not to break ‘Sabbath’, was the alluring depiction of Melbourne. It expounded so accurately the sights, smells and sounds of the place I miss dearly.

I am looking forward to the release of Eli’s debut novel.  Good luck Eli!

Tagged with: Eli Glasman, gay, Jew, jewish, melbourne, not that theres anything wrong with that, seinfeld, Shabbat, The Boy's Own Manual to Being a Proper Jew
Posted in Reading