Sigur Rós – Njósnavélin (The Nothing Song) and Cameron Crowe

I came across ‘The Nothing Song’ song some years ago when I watched the final scene in the movie Vanilla Sky.  Cameron Crowe, the director of Vanilla Sky has such a great taste in music as seen by the song selections in his movies. He wrote and directed a very underappreciated movie called Almost Famous which is semi-autobiographical as Crowe himself was a teenage writer for Rolling Stone. 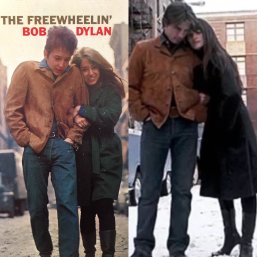 Interestingly, he wrote the liner notes on Bob Dylan’s legendary bootleg release Biograph. Bob Dylan songs and references feature heavily in his movies including the replication of Bob Dylan’s Freewheelin’ album cover in Vanilla Sky as seen in this image.
Good on Cameron Crowe for selecting this little known Icelandic music phenomenon to bring home his movie. The last 15 minutes of Vanilla Sky always moves me, mainly because of how effectively The Nothing Song captures the final lucid-dreaming epiphany of the protagonist.
This is music making at its finest. Njósnavélin (Nothing Song) sounds otherworldly and truly transcendental. I never get tired of it.