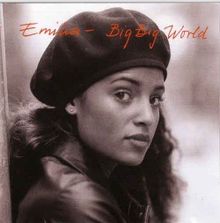 Lets just keep this a secret between you and I, shall we? But, I love this song! My eyes become watery every time I hear it. It reminds me of my daughter.
I know the lyrics won’t be catching the eyes of the Nobel prize selection committee anytime soon, but if there was a Nobel for a song which immediately makes a grown man a complete mess then I’d nominate it. Coincidentally, the Nobel is awarded in Sweden and this is where today’s artist Emilia Ryberg is from.

Big Big World was a big hit in Europe, but tanked in the US where it remained bottom of the Billboard 100. Ouch! But the song was given a Grammis award for “Song of the Year”. The Swedish music award Grammis not to be confused with the Grammy. It even hit No 17 spot in Australia! See, us Aussies can be a sentimental bunch. Big Big World was the premier single off Emilia’s debut album of the same name. The album went platinum in Norway and Sweden in just 11 days!

I prefer the simple audio recording over the official Video produced recording which strangely has a low volume output so I have presented a lyrics video of the song below.

According to wikipedia: Rydberg was discovered in 1996 by Lars Anderson, son of ABBA’s manager, Stig Anderson. She used the mononym of Emilia in the first years of her career, but more recently she has started to perform under the name of Emilia Mitiku, using her father’s surname. Rydberg’s father is the Ethiopian popular singer Tèshomè Mitiku. Her mother is Swedish. As a student she attended the Adolf Fredrik’s Music School in Stockholm.