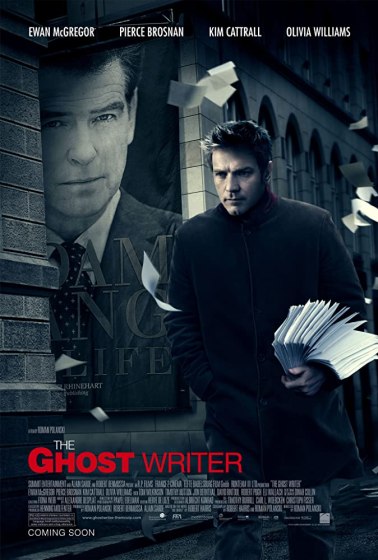 When we started to bunker down in our respective COVID-19 shelters I went through my DVD archives and chose some movies I wanted to revisit. One such movie The Ghost Writer which I just finished watching features today in Friday’s-finest. I guess I have seen The Ghost Writer about six times in total and each time I have found it as engrossing and suspenseful viewing as my previous encounter. Director Roman Polanski is no slouch when it comes to making such austere and suspenseful thrillers – Rosemary’s Baby, Chinatown and Repulsion to name just a few. But The Ghost Writer features here because like most other films I like to write about, it seems an ‘underappreciated’ modern classic, perhaps not so much in critical circles, but in the general audience arena.

IMDB Storyline: An unremarkable ghost-writer has landed a lucrative contract to redact the memoirs of Adam Lang, the former UK Prime Minister. After dominating British politics for years, Lang is campaigning for his foundation with his wife in the USA. He lives on an island, in luxurious, isolated premises complete with a security detail and a secretarial staff. Soon, Adam Lang gets embroiled in a major scandal with international ramifications that reveals how far he was ready to go in order to nurture UK’s “special relationship” with the USA. But before this controversy has started, before even he has closed the deal with the publisher, the ghost-writer gets unmistakable signs that the turgid draft he is tasked to put into shape inexplicably constitutes highly sensitive material.

‘Political thriller’ is possibly my favorite movie genre and that might have something to do with my having graduated with a ‘Political science’ major and serving in the Australian military.  So The Ghost Writer tickles all my fancies as far as subject matter and context. Pierce Brosnan who normally doesn’t rub off well to me as an actor is perfectly cast to play the character of Adam Lang, and has echoes of former British Prime Minister Tony Blair.  Originally Nicolas Cage and Tilda Swinton were cast in the principal roles, but due to postponement of production Ewan McGregor and Olivia Williams replaced them respectively. Olivia Williams who plays Adam Lang’s wife is intoxicating in every scene she appears and her unforgettable reaction at the end of the film is about as good as it gets in terms of climax moment – acting. Kudos also to McGregor who plays the apathetic individual within a larger society to great effect.

The biggest takeway from the film is Polanksi being in so command of his craft. Every image carefully composed, and every moment of information tightly plotted. Polanski’s world view is so thoroughly and crisply represented through this visual style and the eerily atmospheric soundtrack. Interestingly Germany stood in for London and Martha’s Vineyard due to Polanski’s inability to legally travel to those places, as Polanski had fled the U.S. in 1978. A few brief exterior shots for driving scenes were shot by a second unit in Massachusetts, without Polanski or the actors. The film premiered at the 60th Berlin International Film Festival on 12 February 2010 where Polanski won best director.

Tagged with: Roman polanski, The Ghost Writer
Posted in Movies and TV