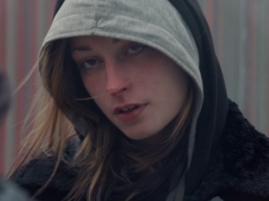 Every two weeks or so I check out the movie database Rotten Tomatoes which lists amongst other things – the latest DVD releases. The movie information of Heaven Knows What caught my eye.

‘Heaven Knows What blends fiction, formalism and raw documentary as it follows a young heroin addict (Arielle Holmes) who finds mad love in the streets of New York.’ – Rotten Tomatoes

I truly didn’t expect anything out of this, which is why it was such a huge surprise.  Its near-flawless as far as documentary-style films go. The plot takes a back seat in Heaven Knows What which might turn people off, but that’s what I adored about it; raw, real and totally honest which defies the limitation of its budget. Too bad the score was detracting especially in the beginning.

IMDB Trivia: The lead, Arielle Holmes lived on the streets of NYC prior to this film and after being discovered by the filmmakers Ben & Josh Safdie, she wrote and texted them almost every situation and story she experienced via her heroin addiction, her tragic relationship with Ilya and life on the streets of NYC. When the film began shooting, Arielle Holmes got clean and remained clean throughout the shoot.

The performances here are compelling and the cinematography superb. Heaven Knows What is a very touching, intimate and stark film. It is probably the best movie I have seen which depicts homelessness since Mike Leigh’s Naked.