Home › Movies and TV › Reflections on the ‘Who Killed JFK’ article

Reflections on the ‘Who Killed JFK’ article

Posted on March 1, 2019 by observationblogger — 3 Comments

I wrote an article here in 2014 about the documentary – The Kennedy Assassination – Beyond Conspiracy. I wrote excerpts from the documentary in an attempt to expose the hypocrisy and misleading farse that which is the famous JFK movie directed by Oliver Stone.

I’m not insinuating there wasn’t some form of cover up, but what I am purporting is that JFK the movie has done more harm in hindering people from understanding what really happened than the suppression of information has by the US Government

Just this morning as I was doing some tidying up of my post, I came across this comment from Lance (who was once a keen blogger himself) in response to my article. Lets just say his comment induced a big belly laugh which I suspect it would have done the first time I read it: 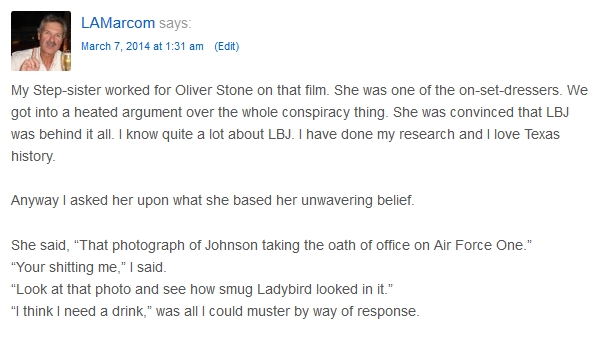 You can read the whole article here which includes the documentary – The Kennedy Assassination – Beyond Conspiracy. 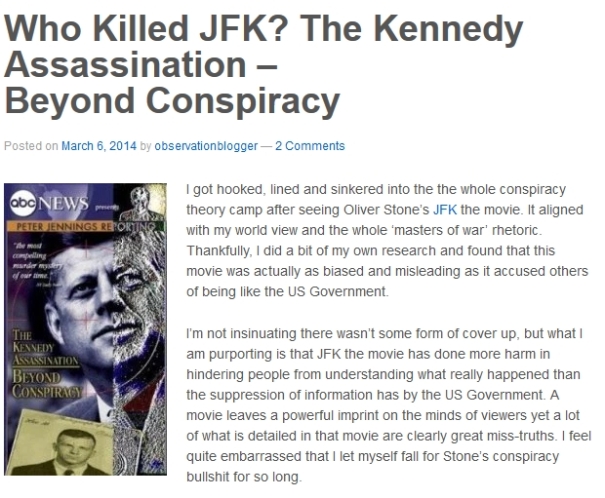 Tagged with: Beyond conspiracy, JFK, Oliver Stone, The kennedy Assassination
Posted in Movies and TV, politics

3 comments on “Reflections on the ‘Who Killed JFK’ article”