Posted on February 17, 2019 by observationblogger — 2 Comments

Heath Ledger was at the peak of his acting prowess when he sadly departed from this great play we all take part called ‘Life’.  He was posthumously awarded the Oscar for best supporting actor in his role as the Joker in The Dark Knight. Despite the magnificence of his performance in Christopher Nolan’s 2nd film of his Batman reboot, I remember Heath more fondly for two other outstanding performances which often get overlooked in his film canon, namely Brokeback Mountain and Candy.   Regarding Heath in Brokeback, I would prefer to let Daniel Day Lewis do the talking which he does so eloquently here about Heath’s ‘perfect’ acting in Brokeback. Daniel who dedicated his award to the memory of Heath received best actor in There Will Be Blood on the same night Heath’s father accepted his son’s award: 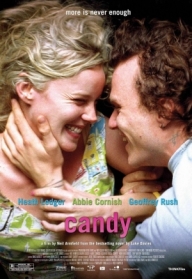 Candy, I find worth discussing because so few people are aware of it. That could be because it was poorly received.  Why the critics didn’t like it is a mystery to me. Candy is a romantic drama centered around a couple’s drug addiction. I found that Heath Ledger and Abby Cornish gave such raw and salient performances and their chemistry was alluring and authentic. The story is engrossing and the ending very poignant as Tim Buckley’s song ‘Song to the Siren’ draws the story to a close. Below is Paula Arundell’s gorgeous rendition of ‘Song to the Siren’ set to scenes from the movie (warning some scenes contain spoilers). Whenever I watch this clip I feel very sad about the passing of Heath Ledger.

I would be doing this post a disservice if I ended it without presenting the original singer-song writer of ‘Song to the Siren’ – Tim Buckley who tragically passed away without finding commercial success in his lifetime.