Posted on September 7, 2019 by observationblogger — 6 Comments 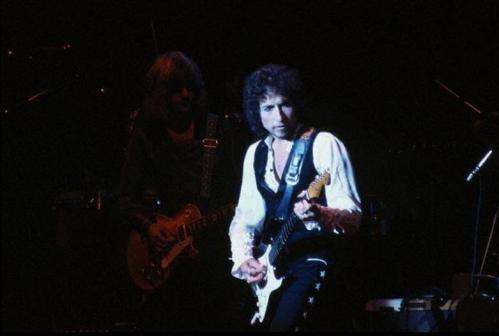 If it were not for Bob Dylan writing so many great songs, I would probably be listening to more classical music. Today we look at All Along The Watchtower, a Dylan song which became so famous because Jimi Hendrix covered it. Many claim it to be the greatest covered song in Rock history. It would also appear Dylan modified the song live from his original version to be a bit more like the Hendrix version. Wasn’t he quoted as saying “sometimes cover’s are better”?

Dylan’s original on his underrated John Wesley Harding album was ‘real’, a parable in my young mind, not obscure. I could see myself being part of it and I could see it from a distance. Hendrix took that essence of the original on John Wesley Harding, and exploded it, disintegrated the song, and turned it into this hypnotic beast. You can read an excellent review here about Hendrix’s version from fellow blogger Badfinger on his blog Powerpop.

To my ears there exists no better version where Bob is honoring Hendrix than live in Vancouver 11-11-1978. It’s a Tour de Force ramp-up of his own song which possesses this other-worldly chaotic barrage and mesh of strange noises, coalescing to form (if you could imagine it) a ‘circus’ big-band sound. I have not heard anything like it before or since from Dylan.

The song was compiled as part of a project called Dylan’s Desert Island Revue‘ which I undertook on the Expectingrain web site.  More information about that project as well as the actual live recording can be obtained from the aforementioned link. The original studio record can be heard below:

Tagged with: All along the watchtower, Bob Dylan, jimi hendrix, live recording
Posted in Music