Posted on November 19, 2019 by observationblogger — 8 Comments 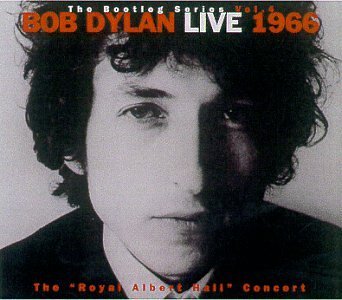 It won’t come as much of a surprise that I adore all the versions of this old folk number sung by Bob. I suppose if I had to choose a favourite it would be the Live 1966: The “Royal Albert Hall” bootleg, yet funnily enough this bootleg release wasn’t performed at The Royal Albert Hall. It was recorded at the Manchester Free Trade Hall during Dylan’s world tour in 1966, hence the quotation marks around the false attribution to the Royal Albert Hall. Extensively bootlegged for decades, it is an important document in the development of popular music during the 1960s.

The dissenters in the audience started a derisive ‘slow hand-clap’ as Bob goes into Baby, Let Me Follow You Down off his first album. Ignoring them, the band kicks in and is throbbing and Bob bounces with this ghost of electricity, playing with the rhythm of words which no one was accustomed hearing. He did however warn everyone earlier saying, ‘It used to be like that, now it goes like this’. He was redefining the music playing field as it were.

He first performed Baby, Let Me Follow You Down in its traditional folk format on his debut album Bob Dylan in 1962. It was originally popularised in the late 1950s by blues guitarist Eric Von Schmidt. But after Bob went electric, he morphed it into this punk-rock number. The actor Edward Norton recently described Dylan in his interview on Joe Rogan as the original punk rocker or words to that effect. Initially I didn’t register with that description until I reflected on Bob’s demeanor in the Don’t Look Back documentary of Dylan’s 1965 tour of England and his Live 1966: The “Royal Albert Hall” concert. His general demeanor, aggressive approach to rock and just the loudness to it are arguably cognizant with a punk-rock brand….

The conundrum with writing these posts about an individual song of Bob’s is it can lead me down a rabbit hole from which I might not return!

A decade after Dylan was infamously heckled ‘Judas’ at the Manchester Free Trade Hall having upset the delicate folk establishment apple cart, he performed Baby, Let Me Follow You Down with a medley of “Forever Young” at The Band’s Last Waltz concert. The version below is from that very concert. I liked one fan’s comment:
‘One thing about watching the Band backing up Bob is that even though they became huge stars in their own right they still seem to really relish playing backup to Dylan. The love and respect must run deep’.

Tagged with: Baby let me follow you down, Bob Dylan, the band
Posted in Music