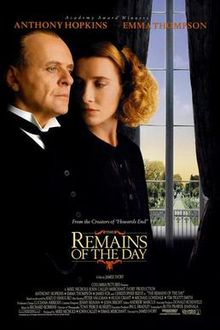 Stevens: In my philosophy, Mr. Benn, a man cannot call himself well-contented until he has done all he can to be of service to his employer. Of course, this assumes that one’s employer is a superior person, not only in rank, or wealth, but in moral stature.

Remains of the Day is an American British drama based on the novel of the same name by Nobel prize winning author Kazuo Ishiguro. It currently sits at number 4 on my all time favourite movie list. In my opinion Anthony Hopkins and Emma Thompson give their career best performances here. It contains my favourite acting from any one movie. I have also seen this movie more times than any other movie. I’m in love with this movie. Fullstop.

IMDB Storyline: Rule bound head butler Stevens’ (Sir Anthony Hopkins’) world of manners and decorum in the household he maintains is tested by the arrival of housekeeper Miss Kenton (Dame Emma Thompson), who falls in love with him in pre-World War II Britain. The possibility of romance and his master’s cultivation of ties with the Nazi cause challenge his carefully maintained veneer of servitude.

It figures here in Friday’s Finest because when critics and public alike cite great cinema classics Remains fails to get a mention. It’s also a real shame that young audiences are by and large unfamiliar of its existence. I understand the solemn and restrained performances and the seriousness of the plot could be off putting to some, but to me it remains the best story of unrequited love in cinema history.

The excerpt below of sdillon’s IMDB movie review of Remains of the Day reflects my own sentiments regarding the picture, but I was so impressed by the manner he expressed them:

It’s a masterpiece of understated emotion. Stevens (Anthony Hopkins) absurdly repressed personality gently takes the audience from laughter to tears in the most emotionally devastating finale I have ever seen. Remains effortlessly embraces complex themes such as misguided loyalty, dignity, pride, wasted lives, and unrequited love. It would be all too much to bear if it weren’t for the film’s genuine good-humoured understanding of English culture. In fact, humour is an important element in the film. There are many laugh-out-loud moments, which make the tragic part of the story all the more real and poignant. All in all, The Remains of the Day is a milestone film; an unforgettable tragedy of a man who pays the terrible price of denying his own feelings.

IMDB Trivia about Remains of the Day: