Posted on February 5, 2020 by observationblogger — 6 Comments 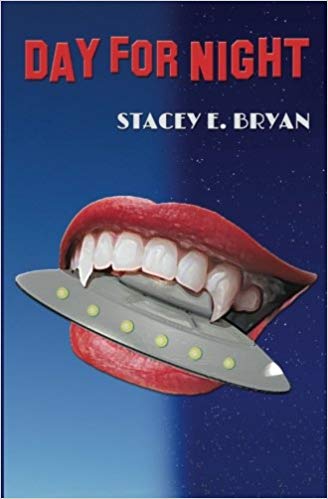 Day For Night is the debut novel by my good friend Stacey Bryan who is a regular contributor to my blog article discussions and maintains a blog site of her own called Laughter Over Tears. Day For Night is a wild, free-spirited, unpredictable, and amusing story.  Set in Los Angeles, it follows Rae a recently ousted reality TV show star (and traumatized shark attack victim) who unexpectedly realizes the world around is not how it seems nor is she the person whom she thinks she is. As life as she knows begins to unravel around her, our unlikely heroine who smokes and drinks too much – has to not only juggle the men in her tumultuous life, but outreach to friends, a young boy and a cult leader to gather any sense of what the heck is going on!

It’s frenetic pacing in conjunction with the manic mindset of our protagonist is what appealed to me most about Day For Night. I found it a ‘real’ page turner and deprived myself of many zzzz’s over two nights to find out how our Rae would fair in this tale. The other aspect of Day For Night which I found so immersive was Rae’s dialogue with other intriguing and richly layered characters.  The conversations felt real and her contacts were quirky and endearing in their own individual ways. I often found myself giggling throughout as Rae traipsed her way through the minefield of conspiring supernatural events and trying to keep her sanity all the while and ascertain the meaning of it all.

Below is an excerpt from Day For Night.  I have taken the liberty to extract those parts which may reveal too much about Ray’s visions, but maintain the flow of dialogue. To set the scene for you:- Rae finds herself in trouble with the law just moments after she has been witness to another ‘otherworldly’ incident at the beach which has left her shaking and trembling:

” ….A female bicycle cop was standing right behind me, straddling her Fuji Special Police Mountain Bike in a manner that brokered no foolishness. She crooked a finger at me. ‘Ma’am. Come here, please.’
Goddamm my frigging bullshit cop karma and the universe that had bestowed it upon me.
‘Yes?’ I was surprised I was still conscious. I walked tentatively forward. I realised I was in shock. My lizard brain was keeping me aloft, operating my body like a marionette from deep within the temporal lobe.
‘Jesus,’ said the cop. ‘You didn’t see me sitting here?’ she asked in amazement. Police officers were always flabbergasted when their authority wasn’t immediately recognised and dutifully acquiesced to. It was called ‘contempt of cop’ and you were up shit creek if they thought you were expressing it in any way whatsoever. I had no time to play ego games with the officer, though. I had to get out of here. Now. And she did too, if she knew what was good for her. We all had to get out of here…..

‘You littered’, she was saying. ‘Right in front of me. You littered’.
If I had disemboweled somebody here in the parking lot, I could understand her amazement. If she had been able to see what was taking place right in front of her out over the ocean, I think her priorities would have shifted slightly. My knees shook. I was pretty sure I was going to spew vomit all over the front wheel. I covered my mouth politely, as if I had to belch. ‘I know o-officer,’ I said. I held the vomit back. My voice broke. ‘But I didn’t see you. I would never litter in front of you.’
‘Yeh? But if I wasn’t here, would you litter?’
‘U-Usually I don’t litter, ma’am. I like to keep our parks and beaches clean too. So we can all enjoy them.’….

I turned and point at the ocean toward the surfers. My hand trembles. Through my peripheral vision I saw the officer perk up, her alarms jumping from ‘littering event’ to ‘call for backup’ in the blink of an eye.
‘Whoa, whoa, whoa!’ The lady cop leapt off her bike and put the kickstand down all in one movement. In a minute, she would search the Z for drugs, handcuffing me. For some reason the theme from Hawaii Five-O started playing in my head. I couldn’t tell her the truth. I’d be arrested for sure…..

‘Sir – ma-am,’ I pointed out at the ocean again. ‘I thought I saw a shark. I could have sworn I saw a shark,’ Now the coup de grace. I help my hand with with its missing fingers. ‘I know I used to be a surfer.’ The lady cop saw my stubs, looked back at me, and the tension flowed out of her like air from a balloon. She removed the hand from the baton on her belt and flexed her fingers.
‘Hoo, boy.’ She peered out at the ocean for a moment . ‘Whoo! So, were you wrong? There wasn’t a shark?’ She looked fairly relaxed now, like she was just inquiring politely but didn’t actually give a shit about any sharks.
‘No, thank God,’ I sagged, acting out my relief, relief I felt in no way whatsoever. ‘It wasn’t a shark. I don’t know what it was. Choppy waves.’
She laughed a little. ‘Jesus, give me a coronary, why don’t you? Had a guy last week, shaking like a leaf. Went to give assistance. He pulls out a Desert Eagle out of his pants , points it, and fires. Killed a seagull. It fell right on a Bentley parked two spaces away.’
‘Was he aiming at the seagull?’
‘No. He was aiming at my head.’ She pointed at her temple. ‘My head. My head. It just ended up missing me because he was shaking so bad.’
‘Oh, my God, I’m sorry. Well, I don’t have a Desert Eagle in my pants, officer.’……

‘Who brings a Bentley to the beach anyway?’ I asked. ‘Seagulls and sand and people walking past with surfboards….’
‘I know right?’ She threw up her hands. ‘Bullets and seagull guts everywhere. When I get my Bentley, I ain’t bringing it here, that’s for damn sure.’
‘God. Me neither.’
‘Okay well, next time, please pick up your trash.’ She had slipped back into Cop Mode again. but it was Cop Mode Lite, now. ‘I’ll just give you a warning. And there’s no smoking at the beaches.’….

‘Oh…’ She turned back to her bike and swung a moderately muscled leg over…She adjusted the strap under her bike helmet. ‘It’s still there, though,’ she said.
‘Excuse me?’
She pointed. I turned to look at the ground.
‘The cigarette wrapper.’ Beat. ‘You could pick it up right now if you really wanted to.’
‘Oh.’ Jesus Christ. ‘Oh. Yeah. I do. I really want to. Good idea.’ I bent over and was suddenly chasing the clear plastic wrapper across the parking lot…just out of reach of my arm…The breeze kicked, and the wrapper fluttered away. It was the gods again, fucking with me….I sensed the female cop’s eyes on me, observing, monitoring….Finally I picked up the offending trash.
‘Thank you!’ called the cop. She had to raise her voice because I had scuttled behind the cigarette wrapper halfway across the United States. ‘Okay, be safe,’ she yelled, and rode off into the L.A. smog. I waved gaily and watched her go.

If you enjoyed this review and excerpt from Stacey’s book I encourage you to purchase Stacey E Bryan’s book at Amazon. There are other reader reviews of Day For Night you can peruse as well. 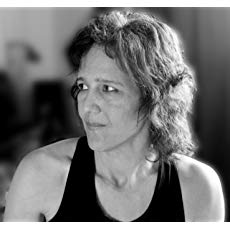 Stacey was raised in the San Fernando Valley but born in San Francisco, where she left part of her heart. She has worked on a dude ranch, coached gymnastics, and captions for the hearing impaired. Her work has appeared in several literary magazines in New York and L.A., including Ginosko and The Rag. She is currently working on the sequel to her novel Day for Night. She lives in “beautiful downtown Burbank,” as Johnny Carson used to say, with her husband who is also a writer.