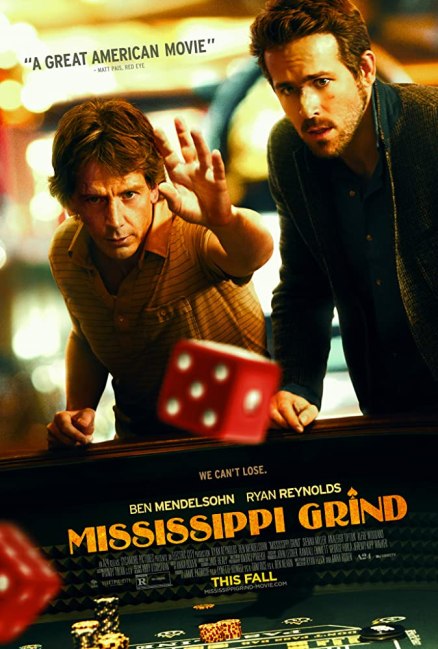 Ben Mendelsohn was one of the first young Australian actors I admired growing up. He appeared in the little known Australian movie The Year my Voice Broke (1987) alongside Noah Taylor who I also liked. Both of these actors have gone on to play austere parts in Hollywood movies and American television. They don’t pull in the big mula like fellow Australian actors Cate Blanchett and Hugh Jackman, but they are hardly soft contenders in the acting department. Ben Mendelsohn I would go so far to describe as an actor’s actor and that is no better demonstrated in two movies – The Australian crime drama Animal Kingdom where he won the AFI’s award for best actor and today’s featured film – Mississippi Grind.

IMDB Storyline: Down on his luck and facing financial hardship, Gerry teams up with a younger, charismatic poker player named Curtis in an attempt to change his luck. The two set off on a road trip through the South with visions of winning back what has been lost.

Ben Mendelsohn is one of the true artistic professionals in how they approach the form. They encroach their character’s skin to such an extent, one can only conclude that what they do is hard work and the result of years of dedication. It is even a joy to watch them doing the mundane or rudimentary in film. In brief, from a voyeuristic perspective you are entranced by them despite however hideous, awkward or morally bankrupt the character is. And believe you me, Ben Mendelsohn ticks all those boxes in Mississippi Grind and Animal Kingdom.

Mendelsohn plays a gambling addict in Grind. I have known addicts of this sort and I have been down that gambling binge on occasions. Movies about Poker and gambling are a dime a dozen, but Grind sits for me well above most because Mendelsohn is just so fricken convincing and intriguing to watch.  I haven’t seen Mendelsohn’s co-star Ryan Reynolds in many movies, but he is impressive too as the shining light and lucky charm for the downtrodden Mendelsohn character. They go on a road trip together to see if they can formulate magic between them as a duo gambling pair.

Few recent movies from Hollywood have intrigued me as much as Mississipi Grind. It may not resonate with those who haven’t seen gambling addiction up close or been in situations like these characters find themselves, but I admire the peculiar acting of Mendelsohn and the sharp script which doesn’t dumb-down for a mainstream audience. If you enjoy road movies like ‘Crazy Heart’ or ‘Rain Man’ or just want to admire an actor in ‘beast mode’ see ‘Mississippi Grind. Mendelsohn grounds the character and the film to a perfect level.