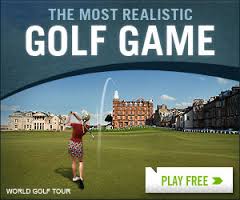 I was meandering about the web a week ago trying to find games for my kid. I fell upon a golf program that I thought might be fun, not knowing in 24 hours I would be ‘like’ totally addicted. Wow, this started out as an exercise to feel like a good parent and it turned into a free for all Dad golf fest. I installed the program quickly and continued to play it, and play it and you know. That’s the definition of a bad father and I didn’t care.

So after a week climbing the levels from ‘hack’, to ‘amateur’ and finally to ‘pro’ golfer I can resolutely say I am sick for this game. And for the ‘only the lonely’ its a great way to meet people from around the world who also have nothing better to do but ‘self-serve’ their insane appetite for hitting a virtual ball around a virtual course for a couple of hours. I’m glad this game wasn’t available 20 years ago when my own father a golfing enthusiast may have also fell under the same spell. I have made more friends in one week than I have made in my life. What’s great about that, is I wasn’t doing it to make friends. I was doing it to sink a put. They may not be real attachments in the sense of being at a party getting shit-faced, but they are people who exist and enjoy playing golf on digitally fabricated courses against similarly fucked-up individuals.

Every game I have played is with a male avatar of the golfer. Golfing is a heavily male dominant sport and based on my experience in the virtual version it has been mostly played by crappy dads such as myself. Then out of the clear blue heavenly skies, a digital God smiled upon us and suddenly a woman golfer appeared in our online golf group.  There she was – in that skimpy, slick, tight golfers two piece. And you know what happened? She kicked our backsides! She outplayed us at every hole and for the first time in history we didn’t care for being beaten. We were playing with a woman!