Posted on October 2, 2019 by observationblogger — 14 Comments 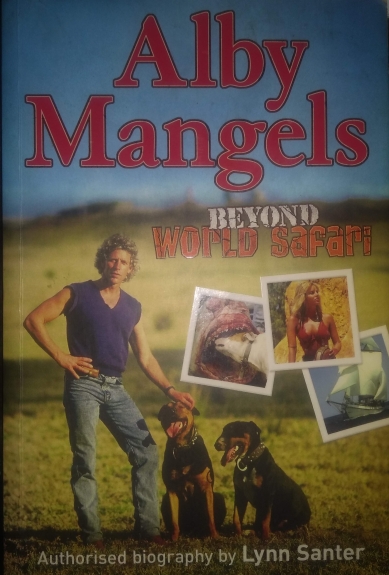 Today we take a walk off the beaten track in Wednesday’s book quotes to look at an authorised biography of the pioneer Australian adventurer Alby Mangels. The author Lynn Santer who I was in contact with in the early 2000s asked if I would read a draft and write a few words about it.  Lynn kindly published those words in the pre-forward section of the book (image above).

As I allude to in my description Alby Mangels was the first household-name Australian  adventurer. When his real-life adventure documentary ‘World Safari’ hit cinemas in Australia it out-revenued Star Wars to give you an idea of its impact. ‘This came from Alby setting off from Adelaide in 1971 on a motorbike with $400 in his pocket, a 16mm Bell and Howell film camera and an insatiable lust for adventure. He came home six years later having travelled through 56 countries, across four continents, shooting a total of eight hours of film that he turned into a two-hour zero-budget movie called World Safari’. – The Australian

Yet his name now scarcely gets a mention. I remember as a child when he journeyed to South America in his budgie smugglers in World Safari II: The Final Adventure. We would watch his documentaries like they were giving out candy. As a boy he presented us to the world for the first time. Never in my wildest dreams back then could have I imagined I would some day be included in his authorized biography on the same page with famous Australians Barry Crocker and Caroline Hayes.

Australian Lynn Santer is definitely a person who knew people and very famous people at that. I remember her telling me about her conversations with close friends Melanie Griffith and Antonio Banderas. As this 2017 article in one of Australia’s most distinguished papers ‘The Weekend Australian‘ reported about her and the legacy of Alby Mangels:

There are signed mementos in her house from wildlife activists across the world; a Born Free poster signed by the film’s star, Virginia ­McKenna. A note from Priscilla Presley: “Thank you for the Easter good wishes and all the goodies… Hope all is well down under. All my best to you, Priscilla.”

“Further down you’ve got signed covers of Tippi Hedren’s most famous films,” Lynn says. There are signed images of Hitchcock’s The Birds and Marnie.