Posted on November 29, 2019 by observationblogger — 4 Comments 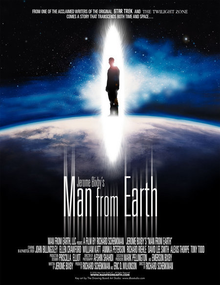 Imagine you are at an impromptu farewell party for a work colleague and it becomes a mysterious interrogation and the retiring scholar whom you are fare-welling reveals he has a longer and stranger past than you could possibly imagine. The Man From Earth contains one of the most original movie concepts I have ever seen. The screenplay was conceived by Jerome Bixby in 1946 and completed on his deathbed in April 1998. After Jerome Bixby’s death, the script was given to Richard Schenkman to direct on a $200,000 budget. The film was shot in 8 days after a week of rehearsals. The whole movie was shot using 2 Panasonic DVX100 camcorders, which probably explains the overall grainy look of the film.

The problem with reviewing this movie is that I cannot reveal the big mystery and the less said about the plot – the better. The good news is – the movie is available free on you tube (see below). Watch the first 10 minutes and I am confident you’ll be glued to the screen for the rest. There are two other recent low budget independent movies which I admire for their originality much the same way as I do The Man From Earth, namely Another Earth and I-Origins. They all have a science fiction bent, but are not slotted easily into that genre. You could class them as humanist-evolutionary in their exploration of ideas. This trilogy above all else challenge conventional ideas of religion and make us rethink our place in the world.

According to wikipedia: The Man From Earth gained recognition in part for being widely distributed through Internet peer-to-peer networks, which raised its profile. The film was later adapted by Schenkman into a stage play of the same name. The producer Eric D. Wilkinson publicly thanked users of BitTorrent who distributed the film without express permission, saying that it lifted the profile of the film far beyond the financier’s expectations; he encouraged fans to purchase the DVD or donate.

The Man From Earth is one of the most unusual movies I have ever seen. I have watched it countless times and I am already in the mood to see it again. The story always pulls me in like a Black Hole and I find myself wanting more and more.

Tagged with: Richard Schenkman, the Man from earth
Posted in Movies and TV