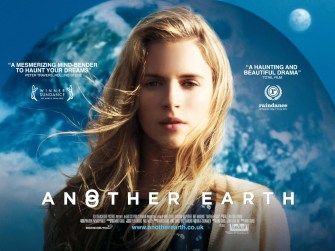 On the night of the discovery of a duplicate Earth in the Solar system, an ambitious young student and an accomplished composer cross paths in a tragic accident. IMDB (Another Earth)

Another Earth is a highly original and thought provoking film traversing the science-fiction realm, but also steeped in the drama genre. I saw Mike Cahill’s other movie I Origins and I thought it had a lot of merit as well. They both remind me of the cult SciFi film The Man From Earth which I highly recommend for those who like those propositional scientific ‘what if’ scenarios that seek to challenge how we view of our very existence.

Below is what I think Another Earth was inferring by the strange course of events which take place towards the end of the movie. How we perceive the ending is critical to understanding what the director and co-writers were wanting us to take away from the movie. Mind you, if you haven’t seen Another Earth, what you are about to read will make virtually no sense.

So lets start backwards as it were.

My understanding is Rhoda appeared to herself on Earth 1 because she also won the very same competition on Earth 2. However unlike her Earth 1 self, Earth 2 Rhoda traveled to the other earth. She did on earth 2 what the husband did on earth 1 which was to travel to the ‘other’ earth. This is speculative of course, but that is my take on why she appears to herself.

I don’t think she killed anyone on Earth 2 because she was dressed like a successful University graduate. So the moment the two earths appeared to one another the altering consequences on Earth 2 were such that she did not collide or kill anyone. Changes will have occurred on the two earths separate to one another from the moment Rhoda appears to look up out of the car or possibly even at an earlier moment. She appears to herself at the end; which implies ‘the husband’ could appear to his own-self and family on Earth 2 knowing that ‘his other self’ is content and he could eventually resume living on Earth 2. To take it one step further, he could just transfigure into his own-self on earth 2 and Rhoda into her own-self on Earth 1.

While this may seem scientifically preposterous, the quantum mechanical ‘Many-Worlds’ theory could offer a shred of scientific validity for entertaining these strange possible notions.

Exactly what the director and co-writers had in mind is of course only known by them. But the parallel selves we see in the movie are all used as metaphors to engage us in asking those big questions about our existence and more specifically which of our ‘selves’ we really ought to be. Each individual is of course one of the same ‘physical-self’, but we live with our potential different selves inside our minds. And depending on how we manage our inner selves and the decisions we make; our behaviors and actions have consequences which determine our destiny. To use the ‘Many-Worlds’ theory analogy essentially we determine where the wave function collapses and hence where our world branches off.

Self locating uncertainty: You know the wave function of the universe, but not where you are within it. Among other things; you branch, and I branch. There are two copies of me, two future-selves and neither one of them know which branch they are on. There will necessarily be a short period of time when the branching has already happened. – Sean Carroll from The Many Worlds Theory by Sean Carroll

My 100 favorite movies are here

Tagged with: Another Earth, courage, I Origin, mike cahill, the Man from earth, we bought a zoo
Posted in Movies and TV, Science