Posted on December 18, 2019 by observationblogger — 4 Comments

My original ticket stub of Tim Winton’s book reading of ‘Breath’ in Melbourne, 2008 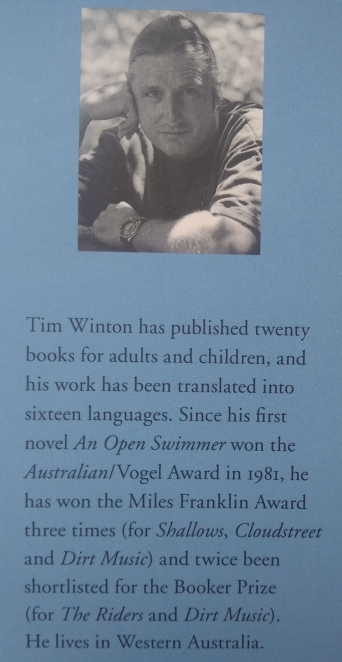 Back cover insert of ‘Breath’

Today’s book excerpt is a continuation piece of a review I wrote of Tim Winton’s classic Australian novel ‘Breath’. Tim Winton is my favourite Australian author and Breath is one of my all-time favourite novels.

Readings, an independent Australian retailer of books, movies and film which sponsored Tim’s book reading stated about the event in anticipation:  ‘It’s been a long time since Tim visited Melbourne and we are delighted to have him available to talk about his new book Breath and why he has become the voice of Australian stories.‘

To recap I wrote about ‘Breath’: I have lived overseas a long, long time and of course I miss my home country, but if I ever want to get reacquainted with my island home then I will dive head-first into a Tim Winton novel. I have him to thank for that.

I had never before or ever since procured a book and read it as quickly as I did with Breath.  I would read it another 3 times that year before I eventually moved overseas. A week ago I dusted it off to rekindle that old flame and see if my obsession with it was justified. Part way through I realised I was reading from a master at work. I was just as mesmerized as I had been 10 years earlier. Every page I was gobsmacked by some outstanding literary prose thinking to myself, ‘How did he come up with that, that, and that?’. To put it bluntly, reading a Tim Winton book is a very humbling experience for any writing enthusiast. He sets the bar high’.

For information about the plot of Breath I encourage you to visit my original post. Today’s book excerpt is lifted from the Introduction stanza. Like the rest of the book Tim throws the reader headfirst into a very confronting situation, which makes you sit up and pay attention. If you get to read Breath you will understand only too well how this Introduction piece fits into the events which unfold. It is narrated by Bruce “Pikelet” Pike, a divorced, middle-aged paramedic. The rest of Breath takes the form of a long flashback in which he remembers his childhood.

WE COME SWEEPING up the tree-lined boulevard with siren and lights and when the GPS urges us to make the next left we take it so fast that all the gear slams and sways inside the vehicle. I don’t say a thing. Down the dark suburban street I can see the house lit like a cruise ship.

Got it, she says before I can point it out.

Feel free to slow down.

But the fact is I feel brilliant. This is when I feel good, when the nerve-ends are singing, the gut tight with anticipation. It’s been a long, slow shift and there’s never been any love lost between Jodie and me. At handover I walked up on a conversation I wasn’t supposed to hear. But that was hours ago. Now I’m alert and tingly with dread. Bring it on.

At the call address Jodie kills the siren and wheels around to reverse up the steep drive. She’s amped, I guess, and a bit puffed up with a sense of her own competence. Not a bad kid, just green. She doesn’t know it but I’ve got daughters her age.

When she hits the handbrake and calls in our arrival at the job I jump out and rip the side door back to grab the resus kit. Beneath the porch steps on the dewy grass is a middle-aged bloke hugging himself in silence and I can see in a moment that although he’s probably done his collarbone he’s not our man. So I leave him to Jodie and go on up to announce myself in the open doorway.

In the living room two teenage girls hunch at opposite ends of a leather couch.

One of them points without even lifting her head, and already I know that this job’s become a pack and carry. Usually they see the uniform and light up with hope, but neither of them gives me as much as a glance.

The bedroom in question isn’t hard to find. A little mat of vomit in the hall. Splinters of wood. I step over the broken-down door and see the mother at the bed where the boy is laid out, and as I quietly introduce myself I take it all in. The room smells of pot and urine and disinfectant and it’s clear that she’s cut him down and dressed him and tidied everything up.

I slip in beside her and do the business but the kid’s been gone a while. He looks about seventeen. There are ligature marks on his neck and older bruises around them. Even while I’m going through the motions she strokes the boy’s dark, curly hair. A nice-looking kid. She’s washed him. He smells of Pears soap and freshly laundered clothes. I ask for her name and for her son’s, and she tells me that she’s June and the boy’s name is Aaron.

I’m sorry, June, I murmur, but he’s passed away.

You found him a while ago. Before you called.

June, I’m not the police.

They’re already on their way.

Can I open the wardrobe? I ask as Jodie steps into the doorway.

Okay. But you know that the police will.

Do they have to?

The mother looks at me properly for the first time. She’s a handsome woman in her forties with short, dark hair and arty pendant earrings, and I can imagine that an hour ago, when her lipstick and her life were still intact, she’d have been erect and confident, even a little haughty.

You seem to have made some kind of . . . assumption.

June, I say, glancing up at Jodie. Let’s just say I’ve seen a few things in my time. Honestly, I couldn’t begin to tell you.

Then you’ll tell me how this happened, why he’s done this to himself.

Yeah, good, I mutter. June, this is Jodie. She’s my partner tonight. Go ahead and tell me why.

Because your husband’s broken his collarbone, says Jodie. He broke down the door here, right?

So what do I tell them? the mother asks, ignoring Jodie altogether.

That’s really for you to decide, I say. But there’s no shame in the truth. It’s fairer on everybody.

The woman looks at me again. I squat in front of her beside the bed. She smooths the skirt down onto her knees.

I must be transparent, she murmurs.

I try to give her a kindly smile but my face feels stiff. Behind her I can see the usual posters on the wall: surfers, rockstars, women in provocative poses. The bookshelf above the desk has its sports trophies and souvenirs from Bali and the computer goes through a screensaver cycle of the twin towers endlessly falling. She reaches for my hand and I give it to her. She feels no warmer than her dead son.

No one will understand.

No, I say. Probably not.

Car doors slam in the street below.

June, would you like a moment alone with Aaron before the police come in?

I’ve had my moment, she says, letting go my hand to pat her hair abstractedly.

Jodie? Will you just pop down and let the police know where we are?

Jodie folds her arms petulantly but goes with a flick of her little blonde ponytail.

I can’t advise you, June.

I’ve got other children to consider.

He will have to go to hospital, I’m afraid.

I get to my feet and collect my kit. She stands and brushes her skirt down and gazes back at the boy on the bed.

Is there anyone else you’d like me to call?

Jodie and two cops appear at the door.

Call? says June. You can call my son back. As you can see, he’s not listening to his mother.

When we’re almost back to the depot for knock-off Jodie breaks the silence.

So when were you planning to let me know what all that was about?

With that poor woman. For a moment there I thought you were flirting with her.

Well, you can add that to your list of complaints.

Arrogant, aloof, sexist, bad communicator, gung-ho. Obviously I missed a few things, coming in late. But for the record, Jodie, I’m not a Vietnam vet. Believe it or not, I’m not old enough.

So get a roster change. Be my guest. But don’t do your bitching at handover in the middle of the bloody shed with your back to the door. It’s unfriendly and it’s unprofessional.

Look, I said I was sorry.

When I look across at her I see in the lights of a passing truck that she’s almost in tears. She hangs on to the wheel as though it’s all that’s holding her together.

She nods. I roll a window down. The city smells of wet lawns and exhaust fumes.

I didn’t think it would hit me that hard.

That was my first suicide, she murmurs.

Jesus, Bruce, they had to bust in the door and cut him down. The kid hanged himself.

And how the hell do you know?

She grimaces and I laugh.

You’re not gonna tell me, are you? I can’t believe you won’t tell me.

I sit there a minute and think of those poor bastards sanitizing the scene before we showed up. The mother sitting there, trying to choose one shame over another. The other kids downstairs cold with shock. The father out on the grass like a statue. Maybe another time, I say.

Well, she says. I rest my case.

We ride back to the shed in silence.

I hurtle on too long through the pounding submarine mist. End over end in my caul of bubbles until the turbulence is gone and I’m hanging limp in a faint green light while all the heat ebbs from my chest and the life begins to leach out of me. And then a white flash from above. Someone at the surface, swimming down. Someone to pull me up, drag me clear, blow air into me hot as blood. He spears down and stops short and I recognize my own face peering through the gloom, hesitating an arm’s length away, as if uncertain of how to proceed. My own mouth opens. A chain of shining bubbles leaks forth but I do not understand.

So I wake with a grunt on the sofa in the empty flat where afternoon sun pours through the sliding door. Still in uniform. The place smells of sweat and butter chicken. I get up, crack the door and smell the briny southerly. I take a piss, put the kettle on and snatch the didj up off the seagrass matting of the floor. Out on the balcony my herbs are green and upright. I tamp down the beeswax around the pipe mouth and clear my throat. Then I blow until it burns. I blow at the brutalist condos that stand between me and the beach. I blow at the gulls eating pizza down in the carpark and the wind goes through me in cycles, hot and droning and defiant. Hot at the pale sky. Hot at the flat, bright world outside.