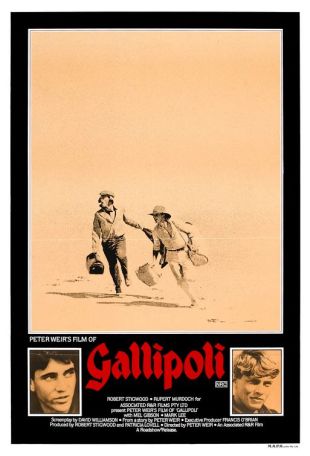 I saw the almost universally praised war-film 1917 in the cinema this week. While I discuss this movie I want to compare and contrast it to Peter Weir’s Australian movie Galipoli.  1917 like Gallipoli is set in World War 1 and both movies contain within their plots the delivery of an urgent order to senior authority to rescind men from ‘going over the top’. Warning: There are spoilers in the comments section.

Character:
Noone could argue that Gallipoli didn’t contain a wide breadth of interesting ‘characters’.  They were multifaceted and many had a larrikin streak, which brought a certain charm and gave them depth and realism. They were endearing in different ways and I felt invested in their plights. 1917 on the other hand had two protagonists whose characteristics resembled what could be termed ‘sensitive new age nice guys’ from a post 2000 era. Their behavior was aligned almost perfectly with that of the other, and their morals impeccable and actions relatively predictable. Their wasn’t much to them except… they conducted themselves most stoically and courteously and were well-meaning. To quote The Wolf from Pulp Fiction:  ‘Because you are a character, it doesn’t mean you have character‘.

Scope:
While I’m not disputing that there are some beautiful shots and great production design in 1917, I really felt like I was watching a sanitized video game. You could almost see the transitions between the cut-scenes and the gameplay. Or another way I could describe the experience as a viewer was like taking a WW1 Ghost train ride for 2 hours. Although it was intriguing for the first 30 minutes or so, the ‘ride’ soon wore a little thin on the senses. Why you might ask? I was unable to appreciate the grandiose scope of the War.

The camera followed the backs, sides and front of the protagonists for the entirety of the movie. It almost bordered a false reality Blairwitch project of a war. When you are solely character-tracking two protagonists for 2 hours without any tangent story telling or ‘other’ backdrops, it can get a little dull and stilted. At least it did for me. If the SNAG characters in 1917 didn’t pull you in, then there was little else to be invested in.

In Gallipoli you could feel how much was riding on everything not only from the swath of soldiers whose journey we followed, but the national anxiety back at home. Unlike Gallipoli it was difficult to appreciate in 1917 the grandiose scope, backdrop and national sentiments about the entire war.  The fusion of different scenes, non-war particpants and national sentiment in Gallipoli culminated to give the viewer a sense of awe regarding the severity and magnitude of this event in that era. Also in Gallipoli, Saving Private Ryan and Full Metal Jacket you bare witness to how war can traumatize the susceptible and innocent minded as well as the mighty gallant ‘Born To Kill’ types. Also the aforementioned movies are not predictable like 1917. Except for one particular scene midway through 1917, the rest of the movie in terms of plot realisation plays out just how one would expect.

Sound:
Apart from Character and Scope, my biggest hindrance to feeling immersed in 1917 was the Sound. The soundtrack bombarded the entire film with little to no respect for real-world sounds. When the two characters (and we as an audience) should have realised of impending troop presence, gunfire or simply vocals of other troops in the trenches, there were none. It may have been a deliberate choice on Mendes’ part but it gave me a sense of seeing a wax museum with just a little pulse. Of course Gallipoli showcased Tomaso Albinoni’s exquisite – Adagio in G Minor to great effect. Even when the same music was used in the one harrowing scene in Manchester By the Sea, people were critical of why they had to reboot this music associated so strongly with Gallipoli. I couldn’t say I wasn’t pissed off when I heard it used again despite my admiration for Manchester By the Sea.

It’s unfortunate since I was a fan of  Sam Mendes’ other films especially American Beauty, Road to Perdition and Skyfall and to some extent Revolutionary Road, the latter I watched on my flight over to Colombia. To this day I consider American Beauty a modern classic. 1917 to my mind is one of the most highly overrated movies I have seen in a long time and unlike most movies I choose to watch in the cinema I have no desire to rewatch it. Without wanting to sound condescending, I can understand a younger audience’s appreciation of 1917 because of the originality of how it is shot and real time gameplay method, authentic production design and the sensitivity of the protagonists, however it wasn’t enough to make me feel I was watching an important historical event, nor did it keep me engaged like the great war movies of yesteryear.