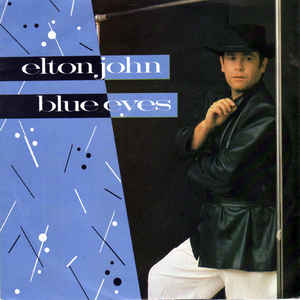 It’s strange this is the first song to appear in the music library project by Elton John considering how many of his songs will feature here. I listened to Elton more than any other music artist before I reached the age around 13. To say his early records did the rounds on our family turntable would be an understatement. All of my family adored his music.

Come to think of it he seemed the biggest superstar I can remember when I was growing up. One of my biggest regrets as far as my musical longings go is not seeing him in concert. I’m sad to read about him recently  cutting short a New Zealand concert after falling ill with walking pneumonia. I have a lot more to say about Elton from a personal perspective, but I’ll leave that for other Elton music posts. I did write a review here of the recent bio-pic film Rocketman which I was pleasantly surprised by.

Now onto today’s track Blue Eyes. I doubt most of my readers will not be familiar with this tune. Elton John has always had a strong affiliation with Australia and that will be the subject for another time, but it’s interesting to note here that the video below for the song was filmed in Australia, on Sydney’s famous Bondi to Bronte walk. You know you have made it when you can put your white grand piano right in the middle of a turret overlooking the Tasman Sea!

It was a huge hit and spent 2 weeks at Number 1. According to wikipedia the song and video was in dedication to Elizabeth Taylor. When it pops onto my player I always love hearing it. It’s just a simple beautiful song although wiki claims harmonically, the song is complex, with the verses in the key of B flat, and the chorus in the key of D minor.

Not only have I included the original video below but also the sublime solo performance on Michael Parkinson’s show.