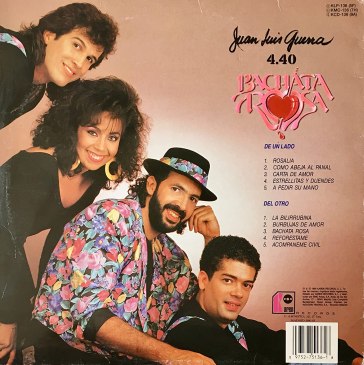 Burbujas de Amor (Bubbles of Love) is the second song to appear from the Dominican – Juan Luis Guerra in this music project. It appears on the same 1990 album as the title song Bachata Rosa (see image above) which featured here. That album was a huge hit, selling 5 million copies worldwide. Juan Luis Guerra is arguably the most popular music artist in all of Latin America and one of the most internationally recognized Latin artists of recent decades.

The ‘radio-play’ his songs get here in Colombia is obscene and for good reason – Juan is enormously talented and the high quality and plethora of music he has released makes the mind boggle. Also, he almost single-handedly populised bachata music on a global level. Bachata music originates from the Dominican Republic and features a more traditional bolero rhythm and aesthetic mixed with bossa-nova influenced melodies and harmony.

Today’s song Burbujas de Amor, like Juan Luis Guerra’s previous entry here Bachata Rosa follows on in that Bachata tradition. What I find so appealing about his interpretation of Bachata music is that it’s just wonderfully soothing to the ear and there is a ‘romantic’ element to it which is distinct from anything I’ve heard in contemporary Western music.  Since this music was so far removed from the music I was accustomed, it took me time to appreciate it. But upon subsequent listens I couldn’t help but feel truly immersed.

Burbujas de Amor caused quite a bit of controversy when it was first released. Apparently some people interpreted its poetry salaciously and it was banned from airwaves in some parts. Regardless, it’s now adored and laps the radio waves. Like with Bachata Rosa, I’m just so impressed by the lyrics-poetry in Burbujas de Amor. A translation can never be perfect… and in this case it’s almost impossible to capture the beauty of the poetry, but here goes with a loose translation of its first part: