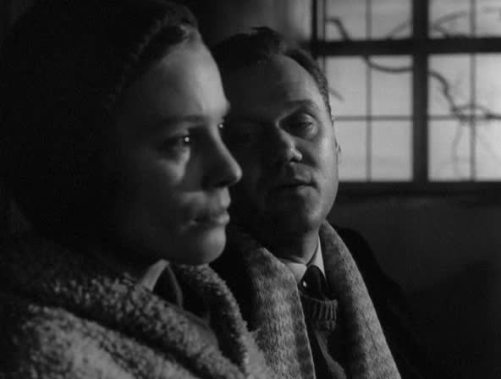 Marta Lundberg, an atheist local school teacher sits and laments at the church pew because she is deeply in love with a pastor whose faith in God, himself and Marta is dwindling into an existential nothingness. At the point of her absolute utter despair she is confronted by Satan who takes on the appearance of the church organist. This is her Garden of Gethsemane.

Welcome to Life on Earth.

IMDB Storyline: On a cold winter’s Sunday, the pastor of a small rural church (Tomas Ericsson) performs service for a tiny congregation; though he is suffering from a cold and a severe crisis of faith. After the service, he attempts to console a fisherman (Jonas Persson) who is tormented by anxiety, but Tomas can only speak about his own troubled relationship with God. A school teacher (Maerta Lundberg) offers Tomas her love as consolation for his loss of faith. But Tomas resists her love as desperately as she offers it to him. This is the second in Bergman’s trilogy of films dealing with man’s relationship with God

From the very first scene, I was pulled into this melancholic and provocative tour de force of art-house cinema. It is directed with such sublime sensibility and intimacy. The realism is extraordinary; few if any other movies I have seen are so authentically delivered.  Many reviews remarked how it is steeped in religious connotations, but I found its themes more closer resembling those of ‘Faith’. Not just faith in God, but faith in oneself, faith in one’s partner, faith in what it means to be human. Winter Light challenges us to reflect on our own lives, our very existence, essentially what it means ‘to be’. For me, it didn’t require multiple viewings to fully appreciate this ‘Tower of Movie’. I got why Bergman said:

“I think I have made just one picture that I really like, and that is Winter Light…Everything is exactly as I wanted to have it, in every second of this picture.”
– Ingmar Bergman from Ingmar Bergman Directs by John Simon 1972.

Despite arriving to this movie without any prior knowledge of the plot, as the last scene faded to black I gasped in awe. Winter Light isn’t really a movie per se, it’s best described as a vision, a vision so pure and finessed to screen that its almost like walking into someone else’s dream. The plot, multilayered symbolism and striking metaphors to the events of ‘The Passion of Christ’ and human suffering could be discussed at infinite length. If you revel in films that are challenging, thought-provoking and stimulating you might also find yourself living in this movie.

‘The film is closely connected with a particular piece of music: Stravinski’s A Psalm Symphony. I heard it on the radio one morning during Easter, and it struck me I’d like to make a film about a solitary church on the plains of Uppland. Someone goes into the church, locks himself in, goes up to the altar, and says: ‘God, I’m staying here until in one way or another You’ve proved to me You exist. This is going to be the end either of You or of me!’ Originally the film was to have been about the days and nights lived through by this solitary person in the locked church, getting hungrier and hungrier, thirstier and thirstier, more and more expectant, more and more filled with his own experiences, his visions, his dreams, mixing up dream and reality, while he’s involved in this strange, shadowy wrestling match with God.
We were staying out on Toro, in the Stockholm archipelago. It was the first summer I’d had the sea all around me. I wandered about on the shore and went indoors and wrote, and went out again. The drama turned into something else; into something altogether tangible, something perfectly real, elementary and self-evident.
The film is based on something I’d actually experienced. Something a clergyman up in Dalarna told me: the story of the suicide, the fisherman Persson. One day the clergyman had tried to talk to him; the next, Persson had hanged himself. For the clergyman it was a personal catastrophe.’