Posted on January 7, 2014 by observationblogger — 11 Comments

George Carlin himself once put it: “Lenny Bruce opened the doors for all the guys like me.”

Last night I watched the sobering documentary on the infamous American comedian Lenny Bruce called, Swear to tell the truth. It was disturbing to see him persecuted and harassed by the police and judicial system in the US because of his anti Catholic rhetoric.

It occurred to me after watching a lot of Lenny’s material here and on you tube that ‘comedy’ seems only truly savored in the era it is performed. Lenny’s material was undoubtedly cutting edge for its time, but I didn’t find it hilarious or particularly poignant.  Comedy in general doesn’t seem to age well unless there is a personal connection to the artist and era it was communicated. I even noticed my favorite sit com ‘Seinfeld’ is beginning to age as its social commentary is becoming less and less ‘current’. For example, Stanley Kubrick’s classic, Dr Strangelove is considered one of the greatest comedies / satires about the cold war, yet if you didn’t live with the threat of nuclear war in the 60s it may be difficult to appreciate its ingenuity. 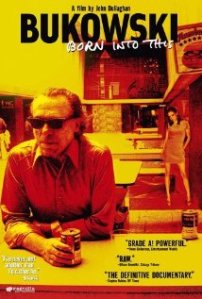 Recently I watched the documentary about the German born American writer Charles Bukowski – Born Into This. Bukowski was a LA based novelist, poet and social commentator,  who changed the way people thought about writing. Like Lenny with comedy, Bukowski was a major instigator of change in the literary world reflecting what many people were thinking, but wouldn’t dare write about.

Wikipedia states, ‘His work addresses the ordinary lives of poor Americans, the act of writing, alcohol, relationships with women, and the drudgery of work. Bukowski wrote thousands of poems, hundreds of short stories and six novels, eventually publishing over sixty books. The FBI kept a file on him as a result of his column, Notes of a Dirty Old Man, in the LA underground newspaper Open City.’ Read more here.

Bukowski  wrote in his novel Women,“I like to change liquor stores frequently because the clerks got to know your habits if you went in night and day and bought huge quantities. I could feel them wondering why I wasn’t dead yet and it made me uncomfortable. They probably weren’t thinking any such thing, but then a man gets paranoid when he has 300 hangovers a year.” See more quotes from ‘Women’ here.

from my bed
I watch
3 birds
on a telephone
wire.

one flies
off.
then
another.

one is left,
then
it too
is gone.

my typewriter is
tombstone
still.

and I am
reduced to bird
watching.

“No sympathy for the devil; keep that in mind. Buy the ticket, take the ride…and if it occasionally gets a little heavier than what you had in mind, well…maybe chalk it off to forced conscious expansion: Tune in, freak out, get beaten.”
― Hunter S. Thompson, Fear and Loathing in Las Vegas

I recently read the undisputed king of rollicking good times Fear and Loathing in Las Vegas by Hunter S Thompson, which is undoubtedly one of my favorite books. This hasn’t aged to me at all.  The rhythm of the book is unmatched. I read this classic in just two sittings. I am loathed to see the movie since I have these vivid images in my head of what I think the story is. I don’t want to ruin that. The mastery of wordsmanship in this book cannot be faithfully replicated on screen. It’s impossible. Words speak volumes in our minds over mere vision and portrayal.