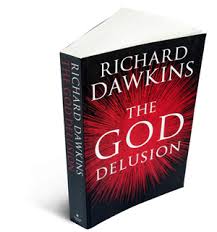 I was a born again christian (baptist) turned agnostic. Tomorrow I could be a Jedi. I have read a lot of books in recent years about theology and the validity of the new testament. I began to really question my christian faith when I saw first-hand how dangerous religion can be in a society where there is little separation between religion and the state.  After four years of tuning into the national nightly news proceeded by a two minute sermon by a Catholic priest, I started to think there might be something wrong. If this country is so religious then why is it so fucking violent? Also, I have been watching a lot of Ingmar Bergman movies which have been a great spiritual awakening,  three of which I have reviewed on this blog.

After I read fellow blogger Lance’s post The Smartest Man in the Room with videos of Christopher Hitchens arguments against religion  I decided I would read the controversial best-seller The God Delusion by Richard Dawkins.

If you’re an open-minded individual, religious or non-religious, you should enjoy or at least find challenging Dawkins’ perspective.  He doesn’t pull any punches, even those fence-sitting agnostics don’t escape the barrage of criticism.  Dawkins believes science should play an important part answering the bigger questions which confound humankind – Such as: ‘Why do we exist’? Religion for nearly all of human history has had a monopoly on providing answers to these questions.  Yet each of the major faiths purport to be the correct one and have fought and killed over the centuries in the name of their causes. Dawkins is plainly incensed about Religion getting all the attention and makes some serious moves to re-contour the map for human thinking henceforth.

The God of the Old Testament is arguably the most unpleasant character in all fiction: jealous and proud of it; a petty, unjust, unforgiving control-freak; a vindictive, bloodthirsty ethnic cleanser; a misogynistic, homophobic, racist, infanticidal, genocidal, filicidal, pestilential, megalomaniacal, sadomasochistic, capriciously malevolent bully…..

Peter Sutcliffe, the Yorkshire Ripper, distinctly heard the voice of Jesus telling him to kill women, and he was locked up for life. George W. Bush says that God told him to invade Iraq (a pity God didn’t vouchsafe him a revelation that there were no weapons of mass destruction)……

Jesus was not content to derive his ethics from the scriptures of his upbringing. He explicitly departed from them. […] Since a principal thesis of this chapter is that we do not, and should not, derive our morals from scripture, Jesus has to be honoured as a model for that very thesis.

I hadn’t read or thought much about Darwinism and natural selection before. This book does get bogged down into some heavy biological theory which could be off putting to the not so scientific minded such as yours truly, but there is method to this atheist’s madness.  Dawkins makes an interesting case that evolution theory and more broadly the practice of rigorous scientific research has and will continue to provide clarity and greater understanding about why we are here.

Think of an experience from your childhood. Something you remember clearly, something you can see, feel, maybe even smell, as if you were really there. After all you really were there at the time, weren’t you?
How else could you remember it? But here is the bombshell: you weren’t there. Not a single atom that is in your body today was there when that event took place …. Matter flows from place to place and momentarily comes together to be you. Whatever you are, therefore, you are not the stuff of which you are made. If that does not make the hair stand up on the back of your neck, read it again until it does, because it is important….

“If you don’t understand how something
works, never mind: just give up and say God did it. You don’t
know how the nerve impulse works? Good! You don’t understand
how memories are laid down in the brain? Excellent! Is photosynthesis
a bafflingly complex process? Wonderful! Please don’t go
to work on the problem, just give up, and appeal to God.”

The main criticism I have with the book other than the complex biological jargon is Richard Dawkin’s tone and attitude. Ironically, I often felt I was being preached to. Being spoken to by a passionately verbose atheist can sometimes feel like being on the sharp end of Christian fundamentalist’s rant. But credit where its due the whole line of Dawkin’s argument is about opening up the mind to see what is real and not what is believed according to a given faith and upbringing. Dawkins maintains the very strong argument that we should be teaching children and our ourselves how to think, rather than what to think. To Dawkins, children who are constantly being labelled Catholic, Christian, Muslim, Jew or Hindu is a grave irresponsibility of parents and society as whole; which I tend to agree.

There is no such thing as a Christian child: only a child of Christian parents.

Faith can be very very dangerous, and deliberately to implant it into the vulnerable mind of an innocent child is a grievous wrong.

As Dawkin’s argues, children have not had time or sufficient brain development to be able to process such information to understand what their purpose is. Yet everyday around the world children are being told to think according to Mummy and Daddy’s belief system or they will burn in hell for eternity.

More generally….one of the truly bad effects of religion is that it teaches us that it is a virtue to be satisfied with not understanding.

Dawkins argues that our brains have been misprogrammed or mismanaged from upbringing to think and look a certain way according to ‘belief vs non-belief systems’ rather than ‘what we see and what we can’t see but know factually to exist; like ‘quantum physics’.  When more human brains are wired to think about their universe and place in it according to a factual and scientific approach, then natural selection will do the rest as our brains evolve to meet these new perspectives and aims.  In my opinion, Darwinism and evolutionary theory will continue to gain prominence as a force for understanding our purpose while religious fundamentalists will as they have always done; compete, fight and kill in the name of their respective belief systems.

Let children learn about different faiths, let them notice their incompatibility, and let them draw their own conclusions about the consequences of that incompatibility. As for whether they are ‘valid,’ let them make up their own minds when they are old enough to do so.

If all the evidence in the universe turned in favour of creationism, I would be the first to admit it, and I would immediately change my mind. As things stand, however, all available evidence (and there is a vast amount of it) favours evolution.