Home › Reflections › What is True? The most provocative yet necessary philosophical debate of our time?

What is True? The most provocative yet necessary philosophical debate of our time? 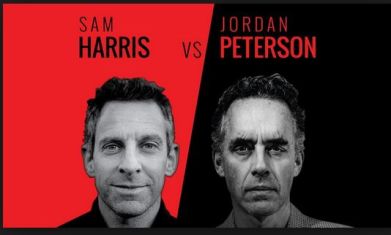 Waking Up With Sam Harris #62 – What is True? (with Jordan B. Peterson)

(The debate starts at 25.00 in the above link) For me at least, it required multiple listens. More listens than what I might ordinarily feel comfortable. It gnawed at me every time to come back and challenge myself about what one of the most fundamental questions of life – What is true?

I have been thinking a lot about the essential philosophical contradiction between the Newtonian worldview (materialist rationalism / determinism and the scientific argument) which I would say your view is nested inside and a Darwinian worldview…The Darwinian view as the American pragmatists recognise like William James and the like. The pragmatists claim that the truth of a statement or process can only be adjudicated in regards to its efficiency in attaining its aim. So their idea was that truth was always bounded because we are ignorant and every action you undertake which is goal directed has an internal ethic embedded in it. And the ethic is the claim that if what you do works then it is true enough. And that’s all you can ever do. As put forth by the pragmatists was that it was impossible for a finite organism to keep up with multi-dimensional transforming landscape. So the best that could be done was to generate random variance. Kill most of them because they were wrong. And let the others which were correct enough live long enough to prosper and propagate whereby the same process occurs again. It’s not like the organism is a solution to the environment. It is a very bad partial solution to an impossible problem. The Darwinian claim to ensure adaptation to the unpredictably transforming environment is through random mutation or death. And there is no truth claim which can surpass that….

Lets look at the hydrogen bomb. If you want a piece of evidence that our theories about the subatomic structure of reality are accurate then you don’t really have to look much further than a hydrogen bomb. It’s a pretty damn potent demonstration. Imagine for a moment that the invention of the hydrogen bomb did lead to the outcome we were all so terrified about during the cold war……
So the proposition that the universe is best conceptualized as sub atomic particles is ‘true’ enough to generate a hydrogen bomb, but it wasn’t ‘true’ enough to stop everyone from dying. Therefore from a Darwinian perspective it was an insufficient pragmatic proposition and was therefore in some fundamental sense wrong.  Maybe it’s wrong in the Darwinian sense to reduce the complexity of ‘being’ to a materialist substrate and ignore the surrounding context.
– Jordan Peterson

From the outset, this debate was scorned by listeners and participants alike; however 5 debates have ensued since between Harris and Peterson about big existential questions like this. Whatever negative assumptions this debate has conjured, there is no denying its huge impact on the recent renaissance of philosophical discussion.

This debate seems to fall head-first into the belly of the whale (as Peterson might describe it); to not rescue the dead father exactly, but to rescue oneself from complete and utter hopelessness. These two opposing world views could be depicted as a ‘Ali-Fraseresque’ intellectual 15 round boxing match. Both are trying to knock the other the hell out, but by the 15th round they both end up felled bloodied and tired still throwing hard punches.

I feel only after probably 10 listens I can find a winner. One in which I feel comfortable claiming the sole victor. But it’s not the point, it’s not even worth arguing since each listener has to weigh it up until it cannot be any clearer to them. And that my friends could take years for a person to reconcile in their own minds.