Posted on October 18, 2019 by observationblogger — 7 Comments 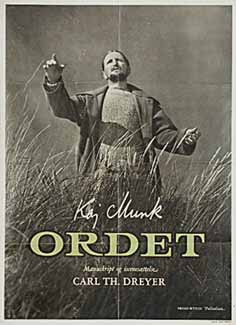 Ordet meaning ‘The Word‘ is a 1955 Danish drama film based on a play by Kaj Munk, (a Danish Lutheran priest), first performed in 1932. The film won the Golden Lion at the 16th Venice International Film Festival. This film about Faith will not come to you, you have to go to it. The experience of the film demands a certain struggle, regardless of one’s beliefs, and the fact is like ‘faith’ itself it can’t be easily processed or rationalized. The film according to wikipedia is ‘now regarded by many critics as a masterpiece, admired particularly for its cinematography‘.

IMDB Storyline: How do we understand faith and prayer, and what of miracles? August 1925 on a Danish farm. Widowed Patriarch Borgen, who’s rather prominent in his community, has three sons: Mikkel, a good-hearted agnostic whose wife Inger is pregnant, Johannes, who believes he is Jesus, and Anders, young, slight, in love with the tailor’s daughter. The fundamentalist sect of the girl’s father is anathema to Borgen’s traditional Lutheranism; he opposes the marriage until the tailor forbids it, then Borgen’s pride demands that it happen. Unexpectedly, Inger, who is the family’s sweetness and light, has problems with her pregnancy. The rational doctor arrives, and a long night brings sharp focus to at least four views of faith.

The standout scenes in the movie involve Johannes, who believes he is Jesus. In the theatrical poster above you can see Johannes preaching as if he were giving a sermon on the mount. It is a beautifully shot scene and I couldn’t help but feel there’s something far more complex going on in this film and much of that is because of the way it’s constructed visually.  The other scene which I found powerful (and there are many of them) is when Johannes in his seemingly impaired state declares the following to the local Pastor who has has visited the Borgen household to greet them for the first time: 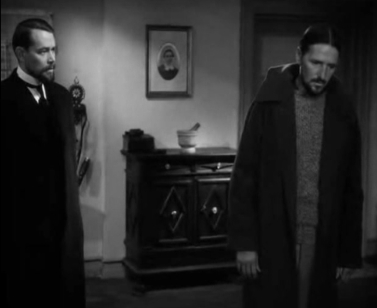 Johannes Borgen: My name is Jesus of Nazareth.
Jesus…

Pastor: How can you prove that?

Johannes: Thou man of faith,
who himself lacks faith.
People believe in the dead Christ,
but not in the living.
They believe in miracles of
two thousand years ago.
But they do not believe in me now.
I am come again to witness for my Father in heaven and to work miracles.

Johannes: Thus speaks my church on earth. The church that has betrayed me,
murdered me in my own name. Here I stand, and again you cast me out. But if you nail me to the cross a second time, woe unto you.

Pastor: This is quite dreadful.

The ending of Ordet is one of the most impactful in cinema history and one which I will not discuss here since many will not have seen the film. But I will say the ending has been a paradoxical point of contention that has stimulated audiences, critics, and thinkers ever since Ordet was released in 1955. I was deeply troubled and moved and elated and frightened at the same time. Ordet is definitely one movie worth struggling with because in its own way it is a miraculous product.

Tagged with: Carl Theodor Dreyer, Ordet, The Word
Posted in Movies and TV