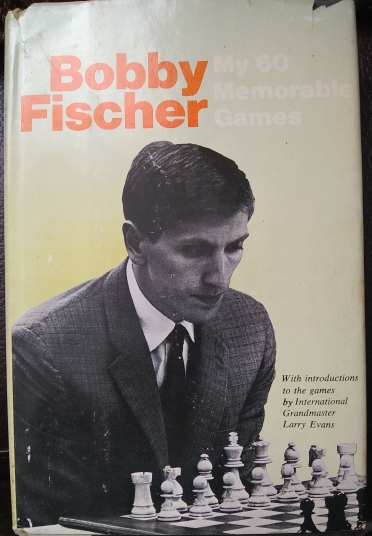 In game 1 he writes that “Sherwin slid the Rook here with his pinky, as if to emphasize the cunning of this mysterious move.”

During one of my chess phases I bought the above book off ebay. It cost me a small fortune since it was a first printing. I have collected other written material about Fischer including the original Life magazine about his historic world championship win. I have been intrigued with chess and its history since I was a young kid. I remember my Dad taking my brother and I to local evening chess classes. I played for my school when I was an adolescent. Although I was never a gifted player I liked the brain exercise and mate-ship which came from playing it during school recess hours and tournaments around the State. I always got a kick out of hanging out with kids way smarter than me.

More than any other chess player I found Bobby Fisher the most compelling, not only because he revolutionized the game and won the USA it’s only world chess championship during the height of the cold war, but because his personal life and psychological state were so perplexing. Published in 1969, Fischer was initially reluctant to release My 60 Most Memorable Games. He had asked to be released from his contract since he did not want to reveal all his secrets, because the book has lengthy annotations and analysis of different possible variations of his games. According to wikipedia – In 1968 he changed his mind and decided to go ahead with publication. His friend and colleague Grandmaster Larry Evans, who helped in an editorial capacity and also wrote introductions to all the games, has said this was because Fischer felt philosophically that “the world was coming to an end anyway” (he thought that the Rapture was coming soon) and he might as well make some money.

One of my favourite documentaries which I frequently revisit is The World Against Bobby Fischer. The entire documentary is available below on You Tube. It does a very admirable job of unpacking the psychological state of one of the world’s greatest chess players. Stephen Tisdale’s reaction to the documentary was poignant:
His youth and upbringing were marred by a lack of love, direction, and identity. Combine these with genius and a extraordinary proficiency at applying that genius to chess and you have a recipe for pain, rejection, foolishness, and antagonism. Never underestimate the power of a good mother and father.

Tagged with: Bobby Fischer, My 60 Most Memorable Games, The World Against Bobby Fischer
Posted in Movies and TV, Reading