Home › Movies and TV › Inside Llewyn Davis – The Coen Brothers

Inside Llewyn Davis – The Coen Brothers

Posted on February 8, 2014 by observationblogger — 6 Comments

Inside Llewyn Davis is about a folk singer trying, but not very successfully to make it ‘big’ in the early 1960s Greenwich Village. Llewyn is a lost man trapped inside a beastly world where its unremittingly bad karma pounds down hard on him. He is a loser who keeps on losing.  We toil with Llewyn;  just hoping he has a warm coat and that someone will answer the doorbell when he rings. 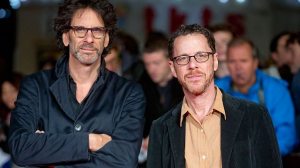 Co-director, Ethan Coen recently said, “It’s more interesting for me as an audience member to see a movie about a loser”. Joel Coen added, “We gave him a lot of crosses to bear.”

We understand Llewyn not so much based on what he says but by the visual cues, his songs, and character traits. Cars whooshing by; the ambient crunch of snow as he ploughs on shuddering and shivering in the howling, freezing wind.

‘This is a brilliant anti-Oscar film with an unsympathetic hero, set against a washed-out New York, a historical time period with no flash or cash or swagger….The qualities that made it so memorable and affecting have counted against it; the films that are nominated reveal what Inside Llewyn Davis is not.‘
– Tim Teeman The Daily Beast. Read more here.

Every meeting in the film; with friends, family, and strangers is like a song from his solo album – Inside LLewyn Davis. They seem to be snippets/moments as a product or reaction of their time like songs are to a folk album. The musical trio performing Please Mr Kennedy alludes to this. The Coen Brothers have transported us to a hub of musical history, an almost visceral musical landscape from the point of view of a largely unknown and unsuccessful musical artist.

“If it was never new, and it never gets old, then it’s a folk song.”

The fight scene shown as the second scene of the movie is shown again to us (with slight editing changes) in its correct place as the penultimate scene before Llewyn says “Au revoir” which means  ‘to see again’ or ‘until we meet again’. The ending seems to suggest the record is on a loop or we have turned the record over and placed the needle down again only this time, we have the added knowledge of having already listened to the songs. We have grown to the know the artist. The second listen is illuminated by that knowledge and our watching/listening experience changes (evidence that the same scene is shown with slight alterations).
This record analogy, playing it over again, isn’t exactly conventional storytelling- in fact it may not even be storytelling. But this is the Coen brothers, and they ain’t interested in convention.

And finally … THE CATS!

Llewyn calls Columbia to inform Goldstien that he has his cat, the secretary says:

The popular interpretation regarding the cat is it represents the meandering lost Llewyn Davis and the quote above ‘Llewyn is the cat’ reinforces this. Also the cat’s name is Ulysses, a clear reference to the Odyssey and their previous film Oh Brother, Where Art Thou. Llewyn even looks inquisitively at a movie poster ‘Homeward Bound’, which is curiously out of place since it was released in 1963. But it is probably deliberate because by 1963 Dylan had taken the folk movement to a place no one had foreseen. Was this this Llewyn glimpsing into the future and later seeing it with his very own eyes at the Gaslight. He of course is too consumed by his own preoccupations and aloofness to pay it any mind. 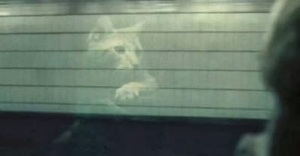 The sharper and much more confronting dual meaning of the cats is that they correspond to the two babies he intent on having aborted. Llewyn ended up with these two cats without any intention of keeping them, just like the two babies. One cat got away (like his first baby that is now 2 years old) and the other got wounded and probably killed by his car (analogous to his second baby which we presume was aborted). The wounding of the second cat occurs just after he passes the highway exit to the city where his first child resides. This isn’t a coincidence.

6 comments on “Inside Llewyn Davis – The Coen Brothers”